‘My daughter Mallika has always been my beacon of hope. When I was diagnosed with cancer in the mid- 80s, she was there. She has been there beside me throughout the ups and downs of my life, especially when my son Kabir passed away in 1997’, says Calcutta based social entrepreneur Shamlu Dudeja, who has been taking the poor man’s fabric, kantha, to different places in the world. I chatted with her recently about her inspiration, her recent projects and what keeps her going.

She started out more than 30 years ago, going to villages and interacting with weavers who stitched kantha saris, shawls and accessories. All her work then culminated in the setting up of Self Help Enterprise (SHE) along with village women to revive the dying art of stitching unusual textures of embroidery on the kantha fabric.

A former Mathematics teacher, Shamlu Dudeja gave up teaching in the mid- 80s and travelled to Shantiniketan where she came across some girls doing a fair in the town. She says, ‘I was so impressed by their kantha wall hangings that I invited

them home and asked them to embroider some saris for me. Once I learned the significance of kantha in a rural woman’s life, it became my raison d’tre. I lived to promote it and the women behind it.”

Dudeja’s famous boutique, Mallika’s Kantha Collection (obviously named after her daughter), is situated in Alipore, the heart of South Kolkata. Mallika’s Kantha Collection today participates in exhibitions in New York, London and Santa Fe, New Mexico. She claims to be a huge fan of stitching, but prefers to call herself an artist rather than a designer. Her creations have successfully been showcased at The Commonwealth Institute in UK, The Gandhi Centre in the U.S. and The North American Bengali Conference (NABC) in New York.

When I asked her about the methods of work that are practiced at SHE, she replied with an earnest and proud smile on her face, ‘When I started out a decade or two back, it was just a handful of people. The main focus of my enterprise was to expose the talent of the rural weavers on a national platform to make them realize how they could also make a difference to the society. I would send trained seamstresses to go to villages and look for talented and unemployed women who knew how to sew and stitch. These women would also have a lot of time to spare every day. Through this project, I found out how easily the inherent needlework skill of these women could be honed. Gradually and after further training, these women were able to experiment with the common garden running stitch and their attempt bore a variety of innovative threadwork and minute designs.’

Besides playing a major role in reviving kantha, Shamlu Dudeja is also the chairperson of the Calcutta Foundation. A few years ago the charity trust joined hands with Australian cricketer Steve Waugh to build Udayan, a home for young children of leprosy patients. After the 2004 Tsunami, she, along with Waugh, raised R.s. 35 lakh to build 500 low-cost shelters on Hut Bay Island in the Andamans for the victims.

I was curious to know more about the different methodologies that helped women in this enterprise. While displaying different saris in her boutique, Dudeja claimed, ‘Women working for SHE do so voluntarily to sustain their livelihood and make their lives more meaningful. While it makes them economically independent it also helps in unearthing the marvelous talent in rural India that is often overlooked by many people. They collect the material from me and I brief them regarding the design and colour scheme. They then return home to work in their free time. There are no deadlines looming above their heads and they can thus work comfortably in between completing various household chores.’

But why bring together women and kantha in the first place? To that, Shamlu Dudeja reminisces, ‘It was my obvious choice to bring these two together because kantha initially began in the rural areas as a community activity where women would stitch together pieces of cloth while chatting and gossiping in their leisure.  I had to ensure that that spirit of enjoyment in crafting something unique while sitting at home was kept alive at SHE. That is why, till today I do not ask the craftswomen and embroiders to come to any specific place and at specific timings for work.

All the workers of this enterprise can thus engage in the business according to their convenience and at different stages of production.’ Passion, clearly rules over money, for the woman always draped in gorgeously designed kantha saris and exquisite pearls.

I egged her on to elaborate more about the inspiration that works behind the creative designs and the nature of the work at SHE. She candidly admitted, ‘There are about 2,000 rural women in West Bengal who have gained economic independence by doing embroidery work for SHE. They mainly draw inspiration from nature. For quite some time now, I have also been working towards green fashion. This involves creating purely handcrafted clothes made of organic cotton and devoid of any chemical dye. Kantha embroidery believes in reuse and recycle and this takes it one step forward. The collection at SHE has bedspreads, wall hangings, dress materials, saris, cushion and pillow covers, throws and canopies. We are also planning to add bridal wear to our collection, especially silk lehenga- cholis and silk sherwanis.’

Speaking about daughter Mallika, she gets emotional and nostalgic. ‘I have, for the most part, been a single woman and she has been the most encouraging force. She has helped me overcome a series of pathetic personal tragedies in my life. Her role in my life has always been that of an angel. She was beside me even when my husband Vijay passed away in 1998. During my cardiac arrest in 2005, Mallika took me to Mumbai for a series of tests. She has been a wonderful daughter, forever urging me to engage in a variety of social activities and take up everything with equal enthusiasm.’ 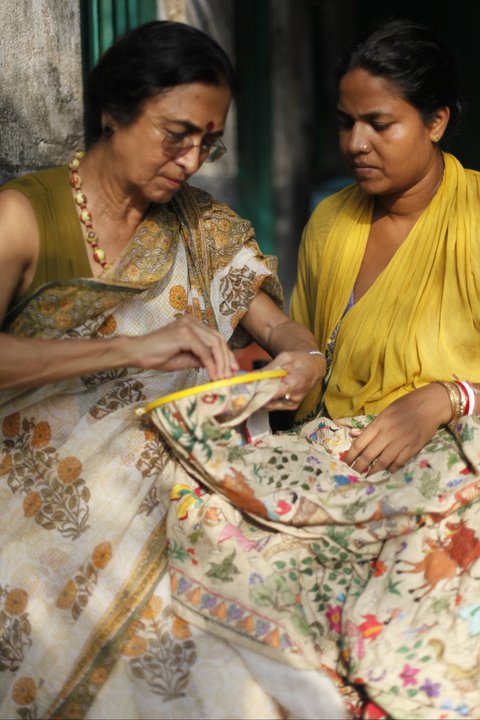